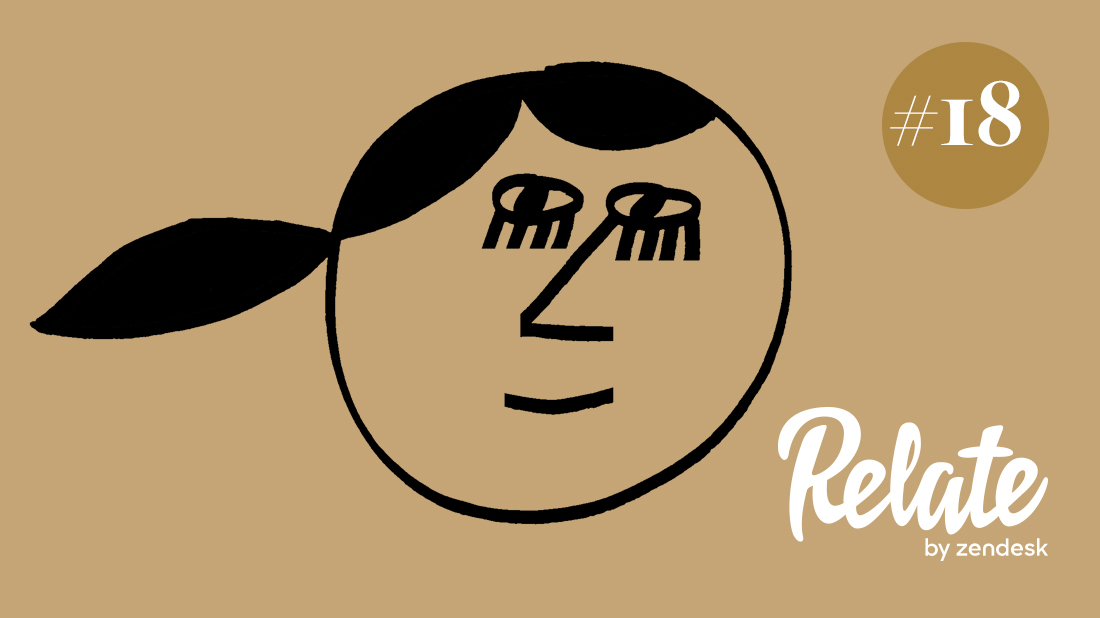 In the TV series 13 Reasons Why, a girl named Hannah sends a series of recorded messages to all the people she felt were complicit in her suicide. The controversial series had many parents and educators concerned that it romanticized suicide, as many teenagers related to the experiences of the main character. On this episode of the Relate podcast, you'll hear from a group of high school students who found inspiration in the series...by turning its central premise on its head.

TAMARA: So picture a typical high school scene. There are teenagers on their way to class and, you know, they're goofing around and some of them are chatting around lockers. But there is one locker that's different. It's covered in hand written notes and cards and drawings and paper flowers, and even some real flowers. And nestled in among the notes, which say things like, "We'll miss you," and "You are so beautiful," there are photos, photos of a girl named Hannah. As the camera pans out, the school bell rings and we hear Hannah's voice, recorded on a cassette tape. She explains that she is going to tell the story of her life and her death and she says that, "If you're listening to one of the 13 recordings, you're one of the people responsible."

That describes the opening scene of the controversial series on Netflix called "13 Reasons Why." It deals with the sensitive subject of teen suicide. Well today, we are going to go visit a high school where the students have turned the show's concept on its head. They call it, "13 Reasons Why Not," and that's what's happening on "Relate."

I'm Tamara Stanners and this is "Relate" by Zendesk. Now think back to your teenage years. Maybe you just sailed through with tons of good friends and positive experiences and a really supportive community.

ANDY: You know, I had those things and still a lot of the time it kind of sucked (laughing)-

TAMARA: Even with all of those things, it's so hard to be a teenager. Hi Andy Sheppard, producer extraordinaire.

ANDY: So, you know, every teenager has to deal with a lot. It's a time of huge changes and there's a lot of difficulties but you know-

ANDY: But I think of what kids are dealing with today versus what we might have dealt and you know like, cyber bullying-

TAMARA: The old things like drugs and alcohol (laughing).

TAMARA: Yeah. And then this "13 Reasons Why" series comes along and parents just started freaking out, that it might romanticize suicide.

RILEY: A lot of schools were sending home letters and emails to parents saying not to watch it.

RILEY: ... And I'm a student at Oxford High School.

ANDY: ... Oxford High is in Michigan and it has about 1800 students and Riley's a member of a group at the school called "The Bully Busters."

RILEY: We deal with bullying and suicide prevention in our middle school.

ANDY: She thinks that the TV series, "13 Reasons Why" basically got it right.

RILEY: So I think it accurately shows what high schoolers go through. I know I or my close friends have been through every situation that the show depicts.

ANDY: So last spring, the Bully Busters at Oxford High started this campaign. It was conceived of by Pam Fine who is the Dean of the school.

RILEY: So she presented this idea to us in memorial to Megan Abbott who was a student who committed suicide four years ago at our school.

ANDY: And as you are going to hear, the project gave 13 Oxford students the chance to share their most painful experiences.

KAYLA : Hi. It's Kayla Manzella and this is the story of my life, or more specifically, how it almost ended.

I got here and I was so excited that I made the JV volleyball team as a freshman. Little did I know how much my life would take a turn for the worst. To put it this way, I was afraid to even go to practice. Things were said to me that no one deserves.

JEEM: This feeling was overwhelming and was slowly killing me. Emptiness was now a part of my life-

TAMARA: Oh god, those poor kids. I remember those days, I really do and it is so hard to go through and even harder to share.

ANDY: For sure, but, they didn't just share it in a small group. The project started in secret but it was actually meant for a wider audience.

TAMARA: Oh the clips though, they are so heartbreaking.

ANDY: They are, but the clips don't end there. A lot of them start that way but the full recordings were released over the course of 13 school days. I want you to imagine, none of the students at Oxford High School had any idea that after their regular morning announcements, they would hear kids like Riley recount these very dark chapters in their lives. TAMARA: Over the PA system in the school-

TAMARA: ... so everybody could hear it.

RILEY: It was very, very difficult to share a story that was extremely personal to me and also a story that no one knew about.

ANDY: Riley's announcement was made in the same style as the recordings in "13 Reasons Why."

RILEY: Hey. It's Riley. Riley Juntti. Don't adjust whatever device you are hearing this on, it's me, live and in stereo, no return engagements, no encore and this time, absolutely no requests. Get a snack, settle in, because I'm about to tell you the story of my life.

"Worthless, self-centered, no morals, easy, grimy, cake face. You would be better off dead." That's just the start of what you would label me as everyday for two years. They asked me why I didn't leave you sooner, why I chose to stay in an abusive relationship. I was afraid, of all the times you threatened me and my friends, for the time you laid your hands on me, for when I started to believe I actually would be better off dead. Because you were the popular athlete, who were they actually going to believe? And when no one asked if I was okay, if I was still breathing, I shut down. I stopped talking, going out, being disgusted with every inch of my body, all because I trusted a pretty boy who would soon take my life away.

ANDY: Yeah I know. But here's the twist, in the TV series, "13 Reasons Why," each of the recordings ends with Hannah naming a person who had contributed to her decision to kill herself. But these "13 Reasons Why Not" tapes ended with students thanking someone who had made a difference in their lives. Someone who had helped them through tough times. RILEY: So this tape is for you, Elise Godfrey. You saw me when no one else did and have continued to listen, share, and appreciate the small things with me. Thank you for your kindness I cannot repay. You are one of my "13 Reasons Why Not."

I was in the classroom when my story first came on and no one in the whole entire school knew that this project was going on except our first hour leadership class. So when my voice came on the PA, I think everyone was really confused and everyone was really shocked 'cause they never knew this about me.

ANDY: So immediately Riley's phone and social media networks were flooded with messages of support.

TAMARA: What a brave thing to do, to put yourself out like that.

RILEY: Well I've had so many people come up to me and just hug me. People I don't even know. Underclassmen messaging me, thanking me for what I did.

ANDY: And later that night, Riley got in touch with Elise, the classmate she thanked at the end of her message.

RILEY: A lot of people chose their best friend or someone really, really prominent in their life and Elise has just been a girl in my biology class who was simply kind to me. She smiled at me every day, asked me how my day was going, asked me questions about my life. She wasn't someone I hung out with after school, but she was someone who simply just wanted me to feel comfortable. She didn't even know my reputation. She didn't even really know my name at first, but she didn't care. She simply wanted to be kind to me and I think that says a lot that people's simple acts can make such a difference in another person's life.

TAMARA: These recordings, they are powerful and brave, at least, they are for me.

ANDY: Well, they were for the students too. Over the next couple of weeks, the effect of these recordings was remarkable.

RILEY: Now tardiness has gone down. Everyone's present in my first hour. If they hear the announcements coming on, people will actually run into a random classroom if they're late just to hear the tape because that's how impactful it's been. Everyone's silent, everyone wants to hear our voices and that was extremely gratifying for me because no one really knew me before and now my voice is out there and I'm making a difference to people who are 15 years old and I think that's the whole point of this project. We have a lot of people whose negative words have deeply impacted us but that's not really what we want to focus on. Yes, all of us that have gone so far have been though some really traumatic events but we didn't want to focus on that. We wanted to focus on the good that people are doing in our school. The words that affect us in a positive way make us better as people.

KAYLA : Suicide solves nothing. Everyone of us has a reason to be here. Words matter. The things we say to each other matter, both good and bad. Thank you to all who have given me words that have helped and healed.

TAMARA: Big thanks to Tina Pittaway for the interviews and for helping to produce this piece. And thanks Andy.

TAMARA: The challenges that teenagers face don't always stop after they leave high school. Whether its school culture or work culture, public shaming is a growing problem and something that needs to be addressed head on. There is an article over on the "Relate" online magazine that deals with this trend. It's called, "The Shameful Trend of Public Shaming," a question and answer with author Jon Ronson, and you can find it at relate.zendesk.com. And, speaking of Jon Ronson, you can catch him live and in person at the upcoming "Relate Live: New York," which happens October 23-25th. Lots of great speakers including Daymond John from "Shark Tank," Caroline Bechtel from Pinterest, Dori Rosenberg from Facebook, and many other thought leaders who can help you take your customer service to new heights. "Relate" podcast listeners get a $200 discount when they sign up at relate.zendesk.com/live and use the promo code "PODCAST."

That's it for "Relate" this week. Next week, an incredible story of a father and son team who face adversity with smiles on their faces. Like, big adversity. These two have been through earthquakes and hurricanes and extreme adventures and all the while asking only how they can help other people. It's super inspiring. So be sure to subscribe to "Relate" on Apple podcasts or wherever you listen so you don't miss that one. In the meantime, for more articles on connecting to your customers in deeper ways, visit relate.zendesk.com. And if you want to explore technology built to improve your customer interactions, head over to zendesk.com for a free trial. I'm Tamara Stanners, talk to you soon.

Our technology is only as empathetic as we are