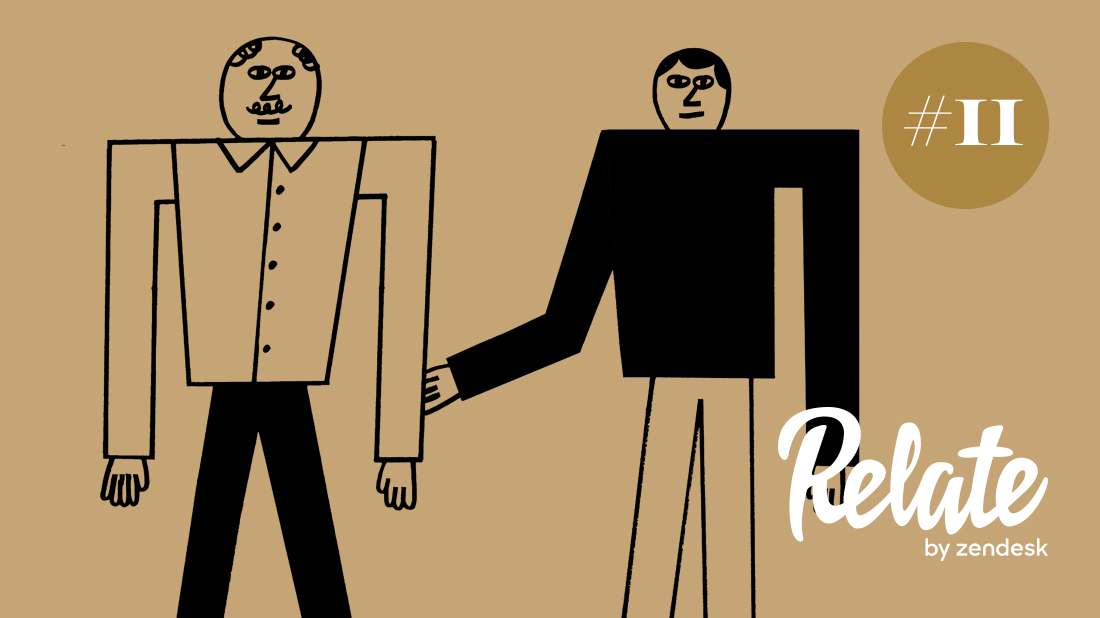 On the Relate by Zendesk podcast this week, we're looking at relationships founded in battle. And it doesn’t get much more adversarial than the one-on-one fight-to-the-finish sport of fencing. Hear from US Olympic foil fencer Nicole Ross as she explains how, with the right mindset and some emotional discipline, her foes truly can be her friends.

TAMARA STANNERS: A bead of sweat forms on your brow, but you can't reach it to wipe it away. Your enemy's face is obscured by a layer of wire mesh. You draw your sword. Nothing else matters at this moment but winning.

And that's what's happen on Relate this week.

I'm Tamara Stanners, and this is Relate by Zendesk. We look at relationships from every angle. Today's relationship is ...

ANDY SHEPPARD: Adversarial, I think would be putting it mildly.

TAMARA STANNERS: Yeah. That's producer Andy Sheppard. What is this, some kind of fight to the death thing?

ANDY SHEPPARD: No, but there's definitely some hand-to-hand combat in this story.

NICOLE ROSS: It's a combat sport. You're fighting someone, so it can get personal.

NICOLE ROSS: I am a fencing athlete ...

NICOLE ROSS: ... and a fencing coach.

ANDY SHEPPARD: We're going to hear from her in a second. You know how we talk about all sorts of different relationships on the podcast.

ANDY SHEPPARD: Well, I wanted to get a sense of how professional adversaries manage their relationships, how a prosecutor gets along with a defense attorney.

TAMARA STANNERS: Totally. Or how do politicians handle each other after they've been attacking each other through the campaign and then they have to work together?

ANDY SHEPPARD: Yeah, exactly, because these people have to have relationships after the fact. Otherwise, nothing gets done. Sports has lots of examples of adversarial relationships, and one-on-one sports like wrestling or boxing or fencing, that's raw adversarial competition.

TAMARA STANNERS: Totally. Fencing is the sport with swords and the "en garde."

ANDY SHEPPARD: Yeah, exactly, although in fencing they call them foils instead of swords ...

TAMARA STANNERS: Of course, of course.

ANDY SHEPPARD: ... if we're going to be proper about this. It's this centuries-old sport that was designed so you could practice dueling swords.

TAMARA STANNERS: Without killing each other. I like that idea.

ANDY SHEPPARD: But it's still super intense, even if no one's getting impaled or whatever. The thing is, the fencing community, as you can imagine, it's not huge, so basically everyone knows everyone else.

ANDY SHEPPARD: These relationships exist, which is great, but the competitions are one-on-one and they're fierce, as Nicole said, so how do you get along with your opponents, and your teammates even, because sometimes you have to fight them?

NICOLE ROSS: The hardest situation I think is when you are fencing not just someone who you consider a friend, who you like, but your teammate, so someone from your own nation who you train with and fence with against other nations and who oftentimes is your roommate who's living with you at the competition, spending time with you, eating dinner with you, eating breakfast with you, doing everything with you, lying in bed with you at night talking to you about your family or whatever. Having to compete against those people and having to put on a face for that is definitely one of the biggest challenges that exists.

TAMARA STANNERS: I can't imagine what it would be like to face such a close friend in what's basically modeled after a battle to the death.

ANDY SHEPPARD: Well, imagine this. You and your teammate start the Grand Prix of fencing and you start the competition on opposite sides of the bracket.

TAMARA STANNERS: What is a bracket?

ANDY SHEPPARD: I want you to imagine that you're on one side of this bracket and your teammate and really good friend is on the other side of the bracket, but slowly each of you is progressing and you're slowly moving towards each other and this personal battle is looming.

NICOLE ROSS: Most recently, I have had to fence my teammate, Lee Kiefer, who is number two in the world and she's an incredible competitor. We're spending the whole day on opposite sides of the bracket so we weren't meeting each other before the final bout, cheering each other on and hoping that the other one would succeed and win and cheering for each other when the other one wasn't fencing, and then ...

ANDY SHEPPARD: As the tournament continues, they're getting closer and closer, until finally they're facing each other on this platform, the piste they call it.

ANDY SHEPPARD: What we've got here is friend versus friend, teammate against teammate, American against American, and the stakes are high. They both desperately want this honor of being the first American women's foil fencer to win a Grand Prix title.

NICOLE ROSS: That was tough. As soon as the last touch is scored and the bout is over and she ended up beating me, obviously I felt disappointment.

TAMARA STANNERS: Oh, I would feel so disappointed too, and miserable really.

ANDY SHEPPARD: Yeah. You've worked so hard for this.

ANDY SHEPPARD: But Nicole's a pro.

NICOLE ROSS: I just immediately was so happy for her and thinking about how we were going to have an American flag raised in this Italian venue. I think it was bittersweet, of course, to lose, but also you're really happy for your friend at the end of the day.

TAMARA STANNERS: Well, obviously she's very mature about all of this, but it can't always work out like that.

ANDY SHEPPARD: No, I think most of the time it's probably a lot harder to manage than that.

NICOLE ROSS: There are people that I've encountered and there are times that I've fenced teammates and I've beaten them and they haven't been able to look me in the eye for a few days afterwards, or they've avoided me, or it's been very obvious that they don't want to interact after a loss against me. In those situations, I have to try to be understanding that it's a really difficult situation and it's awkward. It could be that the person is just having trouble knowing how to act and that it's not necessarily personal, or maybe it is personal. Some people take these things super personally. Yeah, there's definitely all different kinds of reactions. It's a combat sport. You're fighting someone, so it can get personal.

I have certainly seen, for example, two competitors who have to compete with each other for one spot on an Olympic team have their relationship go to a place where it might not be able to return. That's definitely sad, but also understandable to a certain extent, with the pressure that we put on ourselves and the pressure that gets put on us to perform at this level.

TAMARA STANNERS: So much pressure. How do you deal with it so it doesn't ruin you or ruin your beloved sport for you? ANDY SHEPPARD: Nicole has a simple bit of advice, and I think this applies outside a sport as well. NICOLE ROSS: I teach this to my kids and I've been taught this since I was a little kid: You leave it all out on the strip. To us, that means you put on your most tough face when you are fencing. It doesn't matter if you know the person, if you love the person. You put on your mask and you fence them as hard as you can, as honestly as you can, as competitively as you can, and then you leave that behind on the strip. When you get off the strip, you come back to the person that you are in normal life. That's what that refers to.

TAMARA STANNERS: Thanks to Jeff Ulster for that interview with US Olympic fencer Nicole Ross. Even if you're not an Olympic athlete or a lawyer or a politician, it's useful to know when to dial down the competitive attitude from time to time, or to let others get the win, or, better still, take your adversaries out for coffee. There's a piece over on the Relate online magazine called “Office politics: players gonna play and haters gonna hate,” and it's got some great tips for neutralizing office rivalries before they get out of hand. Go to relate.zendesk.com.

TAMARA STANNERS: I'm sorry. I'll go get it right now. That's it for Relate this time around. In two weeks, a culture clash episode. We've got a story of two men from really different cultural backgrounds. I mean, we're talking long-standing animosity here. But these two men formed an unlikely friendship over the course of a 4,000-mile bike trip. Subscribe for free on Apple Podcasts or Google Play or wherever you listen, and we'll serve up that episode and a bunch of other great stories that we've got in the works. In the meantime, for more articles on connecting to your customers in deeper ways, visit relate.zendesk.com. If you want to explore technology built to improve your customer interactions, head over to zendesk.com for a free trial. I'm Tamara Stanners. Talk to you soon.

Thanks, Andy Sheppard. What about you? What do you get to say in there?

TAMARA STANNERS: For me and Andy, bye.

Nailed it: Customer service quotes to get you motivated

Union+Webster: The value of conscious consumers

Neuroscience: today’s tool for understanding customers and ourselves