Editor’s note: We’re extending International Women’s Day throughout the month of March to celebrate women in support leadership in this 4-part interview series.

When you first meet Laura West, a few things might strike you. Her quiet confidence, maybe. It’s not shyness, it’s just not in your face. There’s also a sense that wherever she goes, this Colorado native fits in—and if you’re with her, she would for sure include you. West exudes strength… At any moment this self-proclaimed weekend warrior might don a motorcycle helmet and zip off into the mountains for a weekend on skis.

In a word? Laura West is cool.

Strength and confidence surely come in handy in West’s role as senior manager of customer experience and operations at ThirdLove, the growing, increasingly high-profile bra company based in the Dogpatch area of San Francisco. After the founders learned early on that more than a third of women are between sizes, the company made waves as the first bramaker to offer half-cup sizes. And with its Fit Finder quiz, women can find their recommended size in a few seconds. Currently, ThirdLove sells 78 sizes of bras—in comparison to the Body by Victoria line of Victoria’s Secret, which sells 36 sizes; 33 sizes at True&Co startup Harper Wilde, which sells six sizes; and 58 sizes by Aerie by American Eagle—and plans to keep expanding. When a company is founded around meeting the needs of so many different people, customer service must be multifaceted and tailored to the individual. Especially when goals like long-term customer loyalty are critical.

Her philosophy of support

For West, there’s both a practical and philosophical link between the company’s core belief—that every woman deserves to feel comfortable and confident—and the way she and the company approach customer support. “We push people to exchange. I don’t know of any other industry that does that.” That means proactively reaching out to customers to say, "How's your bra feeling? Do you have any questions?" The exchange policy is 60 days (versus 90+ days at Victoria’s Secret and 30 days at True&Co). Yes, that’s a generous two months, but there’s a practical business reason: A customer has time to come back and say, "I don't like the fit of my bra, it's not right," at which point a ThirdLove stylist (the company’s term for support agent) can get that person in a bra that fits correctly. 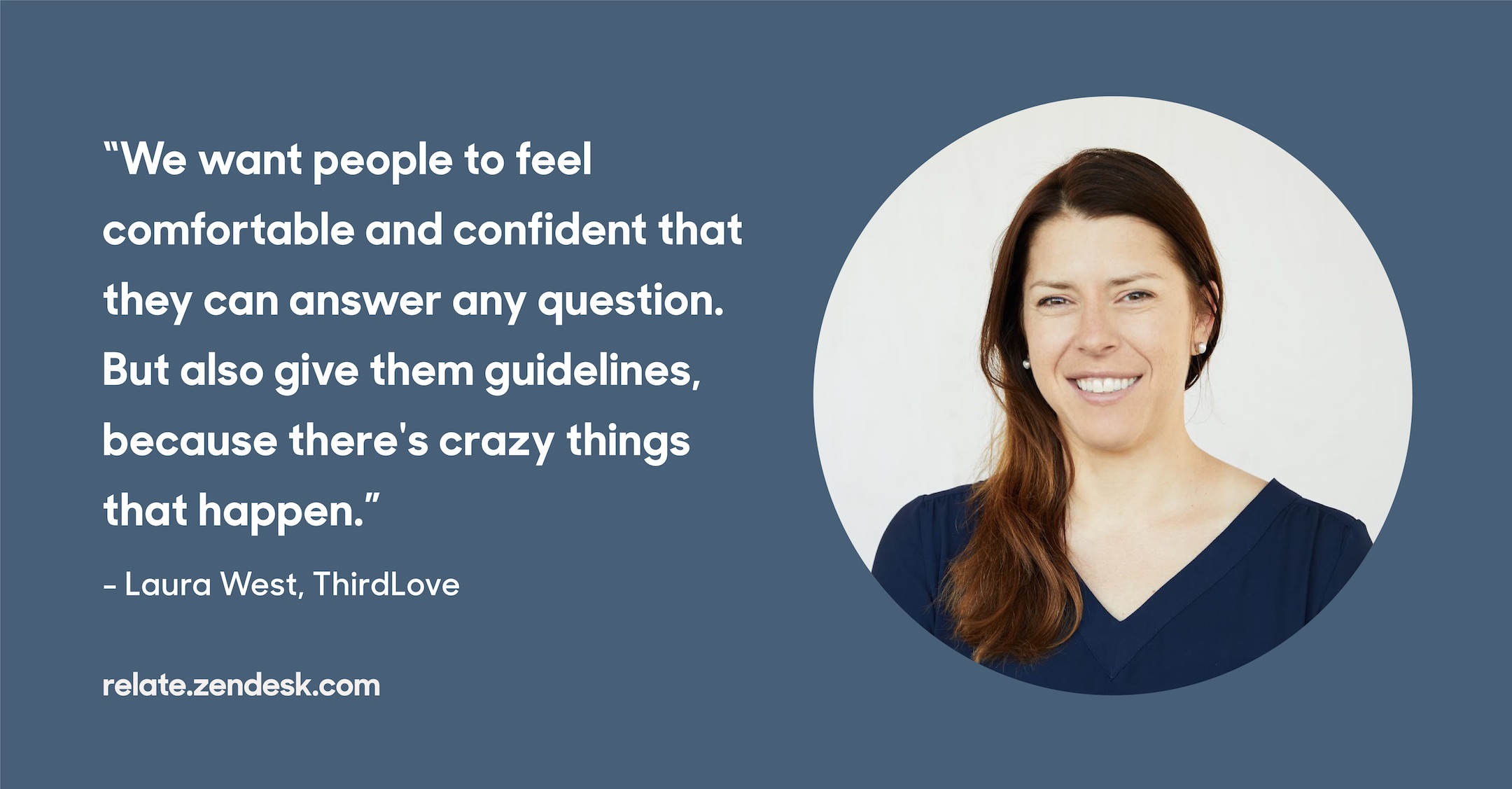 The company has found that women go through a surprising seven to 10 bra sizes in a lifetime, due to life changes like puberty, childbirth, and aging. “We are very big on fit,” says West, “because if your bra fits right, you'll hopefully become a lifetime customer.” It’s also pretty easy to get in touch… 6am to 9pm Pacific, every single day of the year, on the channel of your choice—phone, chat, text, email. All support is based in San Francisco and Chico.

West began her career as a claims adjuster in medical malpractice. The fundamentals of customer support are basic anywhere you go, she says: following up with people, keeping in touch, responding when people have requests. “It's listening to what they need and being able to understand what they're asking for,” says West, “which might be a different problem than they think that they have, going to the root cause of it.” Working with physicians gave West another critical skill: “They were often talking about things that I had no idea about, so I became very good about saying, ‘I don't understand. You need to help me understand.’”

From there she moved to Zenefits, a startup that offered cloud-based HR software, in particular health insurance. It had a “very build-fast philosophy,” and the need to build quickly. Naturally, that kind of swift acceleration sometimes led to customer issues. ThirdLove was a client of West’s team, and the company experienced “pretty real problems” with the Zenefits software. Through the escalation process, West got to know ThirdLove cofounder, David Spector. She describes their first interaction as “not ideal.” What she’d promised would happen with the software... didn't. “But he learned that I was trying to be an ally and give him as much information as I had,” West recalls. One issue involved payroll and was, in other words, time-sensitive. West would send information across herself and ask Spector to text her with any concerns.

Working together eventually led to a job offer. West had an SaaS background… Revolving around software and the cloud, Zenefits was the definition of tech company. But so was ThirdLove. Just different: a tech company with a physical product, the kind of product integral to millions of daily lives.

West started off at ThirdLove on the support-based side of things: helping frame customer inquiries and writing macros. Her role is now much more operationalized. “I love working with customers,” she says, “but I also hate it when a customer is forced to ask a question that they should be able to self-help for, that somebody on my team will give the same response to 30 times.”

When a company is founded around meeting the needs of so many different people, customer service must be multifaceted and tailored to the individual.

West is interested in the power of AI to improve service, with caveats: If it gives customers the right answer, it’s terrific, a win-win for the company and the customer. But if a bot does not respond well, the interaction reflects poorly on the customer, and the customer is irritated to find they’ve been dealing with a bot. She uses the example of a phone tree, where someone is trying to get help and saying things that don’t register. “You're just so frustrated by the time you do speak to the support team. And the support has already started off on an unfair foot,” she says. “AI should be invisible, and it should be right.”

On leading and empowering

Keep it simple, sister. This is one of West’s guiding leadership principles, says Debra Moore, an operations team manager at ThirdLove. “Laura does not micromanage, but will step in when necessary. She is focused on empowering others to make decisions and feel confident about the reasoning behind the decision,” says Moore. As long as you can explain your thought process behind a decision or action, and it makes sense, Moore adds, West “is supportive in the initiative taken to make that call.” She may also provide feedback on how to handle a situation differently in the future.

West says she’s not out to make her team’s jobs simple, because bra fitting is not simple. “I want to make it so that they can focus on the thing that the customer wants them to focus on, which is how to get a right fit,” she says. Everything else should be seamless, so that, say, an exchange, is not a difficult process. “How do I make it so that the fit stylist can focus on dealing with that customer's first problem?”

West has evolved certain approaches with time and team size. Originally about 20 people, her team now numbers 180. “You have to be able to iterate,” she says, “and part of iterating is knowing what doesn't work. Upon starting out, the team was “kind of laissez-faire,” pivoting to later implement fairly strict rules and regulations, including ticket audits. The strict protocols, however, detracted from her team’s ability to feel empowered and to make decisions that made sense. “So we've gone back to, what makes the customer happy?” says West. “And that's what we're going to focus on, and that's how we're measuring quality. Did you solve the customer's problem? Yes? Great. That should be 85% of your quality score.”

"So we've gone back to, what makes the customer happy? And that's what we're going to focus on, and that's how we're measuring quality." - Laura West

West calls her support team the eyes and ears on the ground floor—“they're the direct path to what the customer wants and what the customer needs, and if you don't listen to them, I think you lose a ton of insight.” The fresh eyes of new hires present an especially exciting opportunity for West. “I’ll tell them, ‘You're not institutionalized. You're not used to a certain flow, so if you see something and you say, this feels silly or repetitive or unnecessary, please challenge me on that,’” says West. “I made up a lot of these protocols and rules on how we're handling things, and they might be inefficient.” She cites one situation where a stylist identified a way to eliminate a cumbersome step in the return process. “Changing that process made the team feel good. They were no longer jumping through an extra hoop, which was lovely.”

Moore says she can see the continued growth in her team's confidence in their decision-making skills, “and they are quick to handle a situation independently.” This extends past support, says Moore: “My colleagues also have begun questioning the bigger picture in a more meaningful way and making productive changes to processes that positively impact many teams.”

The protocols and guidelines may evolve, but they do matter. “We want people to feel comfortable and confident that they can answer any question. But also give them guidelines, because there's crazy things that happen.” 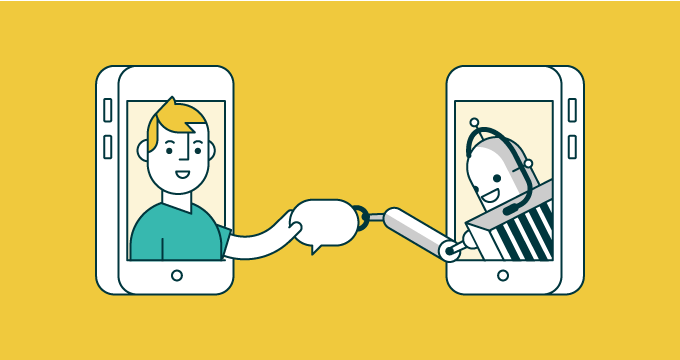 Hear it from the experts

Why RentMoola moved all support channels under one roof

Zendesk on Zendesk: How we expand support beyond customer service

There’s no escape: what brands can learn from the escape room experience