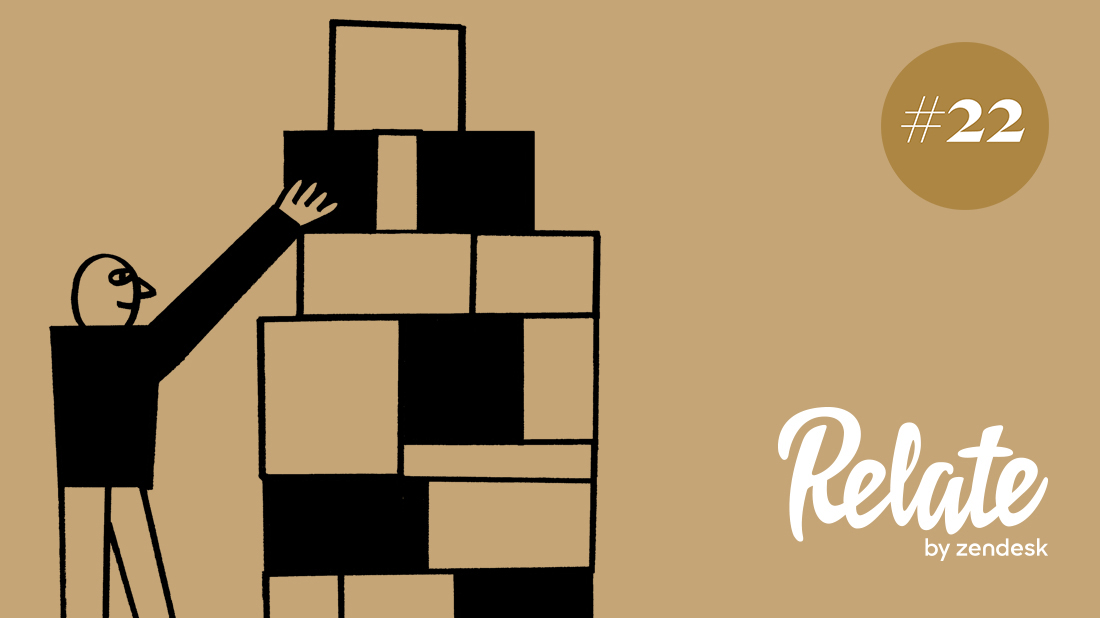 Gus is not your average teenager. He has a hard time relating to people—small talk is a big challenge and connecting on a personal level doesn't come naturally. Enter Apple's personal digital assistant, Siri. On this episode of Relate, you'll hear how Gus is using digital technology for human connection, and how his mom has come to understand him better.

TAMARA STANNERS: What are the qualities you look for in a friend? Is it kindness? Sensitivity? Maybe a sense of humor or patience? Or maybe just someone who you can talk to endlessly about absolutely everything? That's what 14-year-old Gus wanted and he found his friendship in a very unlikely place.

SIRI: I process, therefore I am.

TAMARA STANNERS: Today, a boy's bond with a computer and what that technology taught him about human connection. That's what's happening on Relate. I'm Tamara Stanners and this is Relate by Zendesk. Okay, let's start with our boy. Andy, can you tell us about Gus?

ANDY SHEPPARD: Well, as you might have guessed Gus isn't your average teenager.

JUDITH NEWMAN: What can I tell you about Gus?

ANDY SHEPPARD: This is his mom, Judith.

JUDITH NEWMAN: It's funny, because I'm so used to Gus and his oddities that it's only when I'm in public and I see how other people are seeing him that I realize how different he is.

One day quite recently, he was about 13 years old, and we were in the supermarket. I was trying to get him to order food for us. We were at the deli. I see his brother whispering something to him. At first, we were fine. He's saying, "Mom wants turkey" and "Mom wants ham," and while he's doing this he's hopping up and down because Gus has a tendency to hop.

At this point, I see the deli guy looking around going like, "Wait, what was that part you had in there?" Gus is such an innocent that he doesn't realize he's saying anything particularly odd or different at that time.

TAMARA STANNERS: Okay, so it sounds like Gus generally takes people by surprise.

ANDY SHEPPARD: Yeah. Although he's not an average teen, he's what his mom, Judith, calls an "average autistic teen." When he was six, Gus was diagnosed with autism. He's high-functioning, although his conversational skills are fairly limited.

JUDITH NEWMAN: Now, what it's important to understand here is that this is a kid who still really didn't have a good sense of back and forth conversation. Up until very recently, his idea of a conversation was to spew something at you about turtles or tornadoes or something to that effect and then just walk away. He didn't know. He wanted so badly to connect with people but he really didn't know how.

ANDY SHEPPARD: Yeah, totally. Most relationships are hard for Gus, except for one.

GUS: Do you have friends?

SIRI: I have you.

ANDY SHEPPARD: It is. You know, this doesn't come entirely out of the blue. Apparently, Gus has always had an interesting relationship with technology.

JUDITH NEWMAN: The funny thing about him, too, is that I always knew that like many people on the spectrum he regarded machines a little bit differently. It's not to say that he didn't know that Siri was a machine, that she was programmed, but it's almost as if that idea could coexist in his head with the idea that she had a soul or that machines, in some way, had a soul.

When he was a lot younger, he was eight or nine, I gave him an iPod for the first time. He would never take the iPod out of the house. He just felt like he feels about many things, that it lived in the house. The only exception he would make is when we were going to the Apple store. He felt that the iPod would wanna visit its friends. I laughed about this, but in his mind, knowing that this was a machine, it made sense to him.

TAMARA STANNERS: How did they meet? I mean Siri and Gus.

ANDY SHEPPARD: Well, Judith says that it all started with this listicle from Buzzfeed.

JUDITH NEWMAN: Yes, it was one of those lists that said "26 Things You Can Do with Your Phone." I was going through the list and one of things it said is, "Ask Siri what planes are over your head." I said, "What planes are over your head?" I did and, lo and behold, Siri actually tells you the name of the plane, the flight number, the altitude. I'm sitting there going, "Wow. Why would Siri do this? Why would anyone program artificial intelligence to do this?"

Gus happened to be passing by and he turned to me and he said, "Well, so you know who you're waving at, Mommy." I'm like, "Oh." Gus grabbed the phone from me and it was the first time he had ever looked at Siri or known anything about Siri. He started asking questions of the phone.

TAMARA STANNERS: Then it sounds like Siri spoke Gus' language.

ANDY SHEPPARD: Yeah, I mean, in a sense. First of all, Siri had this patience that most people lack.

Who's gonna be more patient with him? Siri or some person? That's the thing. When you're a kid on the spectrum and you're hard to understand anyway, because he's kind of marble-mouthed, people his own age would walk away if they didn't understand him. Kids would walk away. Not in a mean way, but they just wouldn't put in that extra effort. Siri is there to do it.

ANDY SHEPPARD: Gus also learned that Siri has a bit of a personality, right?

GUS: What are you doing tonight?

SIRI: I'm just telling people on Apple TV what they should watch. Hint, it's not "Lost in Space" [inaudible 00:06:53] Just embarrassing.

JUDITH NEWMAN: It's not "Lost in Space?"

TAMARA STANNERS: She's a funny one. Now Gus had someone to talk to.

ANDY SHEPPARD: Yeah, and he'd spend a couple of hours a stretch chatting with her. His mom says that although she tried not to listen to their conversations, sometimes she couldn't help overhearing.

GUS: Will you marry me?

SIRI: I sure have received a lot of marriage proposals recently.

ANDY SHEPPARD: Mostly Judith found she was amused by her son's interaction with Siri, although sometimes, like when she heard Gus ask Siri to marry him, she was genuinely touched.

I think that it made me see what I didn't see. It made me realize that I can't just look at him and take him on the surface, that there are things going on in his mind and in his psyche that he doesn't always express. I think he has his little life and secrets and things he doesn't talk about. He has his fears that are not always apparent.

ANDY SHEPPARD: Siri continued to allow Judith to notice things about Gus that she otherwise might not have.

JUDITH NEWMAN: He has a father who's a lot older and I didn't really think that he worried about this. I've seen little inklings that he thinks about this, about what might happen when his father is gone. He adores his father, needless to say. I've seen it in questions that he asks. Not abstract questions.

He asked recently, "Where is the nearest hospital?" He would never just say, "Well, I worry about Daddy's health." He's incapable of saying it that way. But I think that he's asking where the nearest hospital is because my husband wasn't feeling well that day.

My husband, by the way, he's 85. There's a significant difference in our ages. That's what I mean when I say that it's made me think about him and his brain and the way his brain works a little bit more. Siri has really taught me to see some things that I might not have seen otherwise about my own son.

SIRI: That's sweet. Is there anything else I can help you with?

TAMARA STANNERS: Judith Newman recently published a family memoir called "To Siri with Love: A Mother, Her Autistic Son, and the Kindness of Machines." Special thanks to Ashley Walters for that interview and for her work putting this piece together, and thanks, Andy.

ANDY SHEPPARD: It was my pleasure.

TAMARA STANNERS: That's it for the Relate podcast this week, but we've got lots more coming. Next week, a really fun story about emotional support pets, or at least about the confusion about what they're for and where they can go. There might be something about an alpaca in a drugstore in that one. Anyway, subscribe to Relate on Apple Podcasts or wherever you listen to get that episode and more.

In the meantime, for articles on connecting to your customers in deeper ways, visit Relate.Zendesk.com. We've got technology to help you do just that. Head over to Zendesk.com for a free trial. I'm Tamara Stanners. Talk to you soon.

How to support your robot co-worker

Is your wearable wearing you down? Create a connection between you and your data.